Larry has hurdled many obstacles throughout his life. Larry has been afflicted with 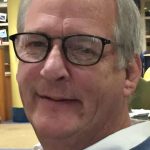 cerebral palsy since birth, which has affected his physical capabilities. Rather than allow this handicap to control him, Larry has faced life with a lot of courage and motivation. Larry accepted Christ at the age of 14 and has had a deep relationship with the Lord ever since.

Larry was born in Madison, Indiana, in 1956 and was raised in Berkley, Michigan. As a teenager he earned the “God and Country” award in the Boy Scouts of America. He graduated from Wayne State University where he received a B.S. in Computer Science. Larry was a recipient of the Jaycee’s “Outstanding Young Man Award” in 1980. He currently lives in Troy, Michigan, where he and his wife, Jennifer, own their own home. God has blessed them with a son, Will, and a daughter, Anna

Larry began his career at IBM. For 16 years he worked as a Systems Engineer in the Marketing Division. . For the next four years, he worked for the State of Michigan as a technology consultant. Now, Larry travels the country sharing his story and he is also the Director of the Men’s Ministry at Faith Lutheran Church.

He is a member of the National Speakers Association. Hurdling Handicaps is a Ministry Affiliate of Joni and Friends.

Larry was active in First Presbyterian Church of Royal Oak, having served as a Deacon, Senior High Youth Advisor, and President of Men’s Fellowship and Coach of the Church softball team. He enjoys all sports, both as a spectator and active participant. His interests include bowling, skiing, basketball, softball, and golf.

Larry is a unique individual in many different ways, but the most important characteristic is his faith in Jesus Christ as his Savior and Lord.